This is a blog post about events in the HBO show, Game of Thrones. If you don’t want it spoiled for you, slowly back away now.

There are few constants in this world. One I think we can all agree on, is that books are better than their adaptations. However, I feel that people take this and run with it and it becomes an unfair assessment of the film or television adaptations.

Hardly ever do you hear someone say, “Sure I like the book better, but that’s because the author…”

Let’s all take a deep breath and be grateful that we have such solid adaptations of our favorite books rather than ripping on them for not being a word-for-word re-creation. You have to really fuck up a story to make me wish the adaptation was never created. (Here’s looking at you, Breakfast at Tiffany’s.)

There are three things in particular with the Game of Thrones television series I’d like to address, though. Sure, these were plot-based decisions made by a slew of people for, I’m sure, a number of reasons. I’m not here to say this ruins the show. I’m here to say that these are HUGELY different plot lines than in the book. They also happen to be things I’m very sad about. But that’s just how the lemon cake crumbles.

This being a food blog, I’ve also created a recipe to accompany each plot point. Obviously.

Sansa Bolton. Sansa don’t marry that beast, yo. It’s Jeyne Poole. Remember her? She’s only briefly in the show. But she’s Sansa’s little friend. Her father, Vayon, was Ned’s steward. In the books, they dress her up in Winterfell clothes and send her off to Ramsay and say that she’s Arya Stark. Since most of the Starks are pretty much dead, who’s gonna contest it? The show simplified matters and just gave him Sansa to rape and torture. For this, I have made Flayed Little Bird. Baked chicken thighs, in a lemon sauce that Sansa would love. I’ve removed the skin with the skill of a Bolton, fried it, then serve it up with the rest of the little bird.

Shireen Baratheon. Shireen does not suffer the horrible death of being burnt alive in the books. This was completely a fabrication of HBO’s rendition of the story. Don’t know why. Can’t think of anything more fucked up than murdering an unloved, lonely, disfigured child by tying her up and setting her on fire. And the only other one I feel bad for in this situation (no, not her screaming mother) is Sir Davos Seaworth. The Onion Knight had a particular fondness for the little princess, who was even teaching him to read. Sent away (on purpose), he doesn’t know about her death, so I’m sure we’re in for a tearful realization at the beginning of the season. That’s what inspired this recipe, The Onion Knight’s Tears. A cocktail, to drown your sorrows in… earthy, strong, and garnished with onions. 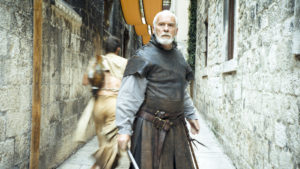 Barristan Selmy. Barristan the Bold. Lord Commander of the Kingsguard. Whitebeard. Honest. Brave. Irreplaceable. Too damn bad he’s dead. Killed in the streets by an attack from the Sons of the Harpy, this death seemed needless. AND… I called it. Earlier in the episode, he had a moment with Dany and it just seemed so predictable and perfect. And that’s the thing, isn’t it? George R. R. Martin’s writing is anything but predictable. We’re always shocked when a character dies in the middle of their storyline. Which is beautiful really, because how often does someone die in real life, right when they get closure. I feel like this episode did the opposite of that. Selmy and Dany had their little tv-perfect moment and I said, “Shit. He’s gonna die.” And he did. And it sucks because he was such a fucking badass and he could have done so much more in the story. For him, we have Bold & Bloody Barristan Shellmy. Mussels for the muscle that protected the king… and the other king… and that girl. Bloodied by tomato sauce for seemingly no reason, because it’s the saison that really shines in this recipe. A bit of boldness from some red pepper and some aged cheese on top, it’s the perfect way to honor the man that shouldn’t have died in the streets like a dog.

The season 6 premiere is fast approaching (Sunday, April 24!). Stay tuned next week when I flip it and make three recipes for book plots that don’t happen in the show. And if you want to check out past recipes, I’ve full on made a whole category for my GoT recipes. Go here; I’m out of control.

Now go forth, and eat like a Baratheon… but try not to die.

Little bird in lemon cake sauce… with the skin ripped off and fried.

Whisk together the lemon juice from one lemon, olive oil, garlic and basil. Sprinkle chicken thighs generously with salt and pepper. Cover in lemon and oil mixture and marinate for at least an hour.

Whisk together the rest of the lemon juice, honey and worcestershire sauce for the glaze. Set aside.

Preheat oven to 400°F. Spray a baking dish with cooking spray and lay chicken thighs, meaty-side-down, in the dish. Bake for 25 minutes. Turn. Bake another 10 minutes.

Just let it all out, Sir Davos… your tears are delicious.

Meanwhile, slice chicken skins into long strips and salt and pepper. Whisk together egg in milk in one bowl. Stir together flour and seasoned salt in another. Heat oil over medium heat. Once preheated, dip chicken skins into the egg mixture, then dredge in the flour. Fry until golden brown. Remove to a paper towel-lined plate to remove excess oil.

Turn oven to broil. Brush glaze onto chicken and broil for 5 minutes.

Remove chicken thighs from oven and serve with fried skins atop them. Garnish with basil and lemon wedges.

Cut lime into quarters and cucumber into slices. Place into a large glass with basil leaves and sugar. Muddle. Add in gin and ice cubes. Stir. Strain into glass and garnish.

In a pot, heat 2 tbsp olive oil over medium heat. Add 4 cloves of garlic and onion to the heated oil. Stir frequently heat 3-5 minutes, until onions are translucent and smell sweet. Add in tomatoes. Continue to cook over medium heat, meanwhile, breaking down the tomatoes with your spoon. Salt and pepper to taste. Simmer for 20 minutes.

Rinse mussels. Look through to make sure all mussels are closed. If any are open, tap them on the counter to make them shut. If they do not, throw them out.

In a large stock pot, heat the rest of the oil over medium heat. Add in the remainder of the garlic and red pepper and stir. Cook for 1-3  minutes, until the garlic is fragrant. Add in the saison and stir. Heat to a simmer. Add in mussels and all of the tomato sauce. Cook over medium high heat, covered, for 8 minutes.

When done, ladle into a serving dish. Make sure all of the mussels are open. Discard any that are still closed. Shave romano cheese over the top. Garnish with parsley. Serve with bread.

Fontina has an Ohio heart and Philly spunk. She loves giving you recipes for hearty food, pop-culture puns and a hell of a lot of craft beer. You can find her in the kitchen, at the bar, on Twitter or marathoning episodes of Shin Chan or Bob's Burgers online.